Tell stories your audience needs to hear, the way they need to hear them...

Master the art of storySelling and increase inbound leads with humanized content. 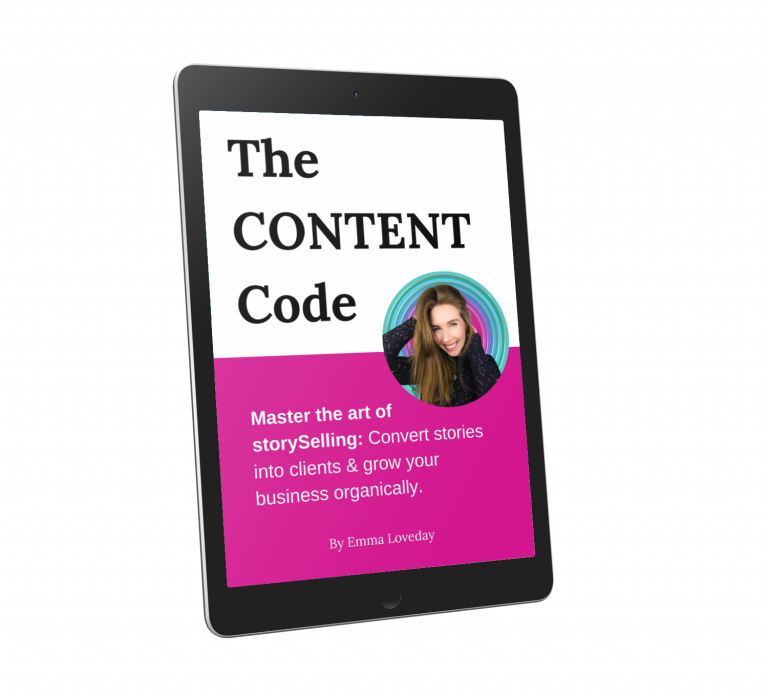 **Grab the PDF downloadable guide today for only £47 and recieve free instant lifetime access to the full digital course released Feb 2023. (The digital course will be £150 to new buyers)**

Two magical words I want us to focus on together:

Did you feel that? I just got shivers down my spine (better shut that window)

I get it, you didn’t start this business to become a marketer. Right?

But hey, you’re nothing if not WILLING.

You’ve made content creation part of your business because, quite frankly, you understand it’s non-negotiable. Except…

*insert image of despair while staring at a blank screen*

This ‘marketing’ malarcky, doesn’t get your juices flowing.

What you want is to create content designed for results (inbound leads PLEASE).

To sign clients through genuine connection (without pushy marketing tactics)

To achieve that juicy goodness, you’re going to need a few things: 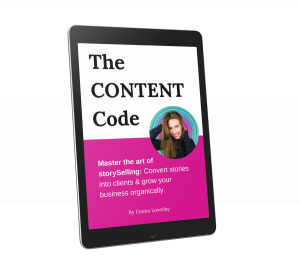 It’s time to share stories in the most effective and feel-good way possible so that YOU love sharing them and THEY love reading them.

Stories that spark conversation through relatabiliy and commonality.

Stories that allow your readers to feel SEEN and UNDERSTOOD (on an almost creepy kinda level).

Stories that make working with you feel like an absolute NO-BRAINER.

Stories that connect on a human level and convert with integrity.

So, how will The Content Code help with this?

1. SETTING YOU UP FOR SUCCESS

2. GETTING OUT OF CONFUSION

10. THREE STEPS TO RINSE AND REPEAT

All of this so you can find the joy, fun and humanity in marketing your online business. 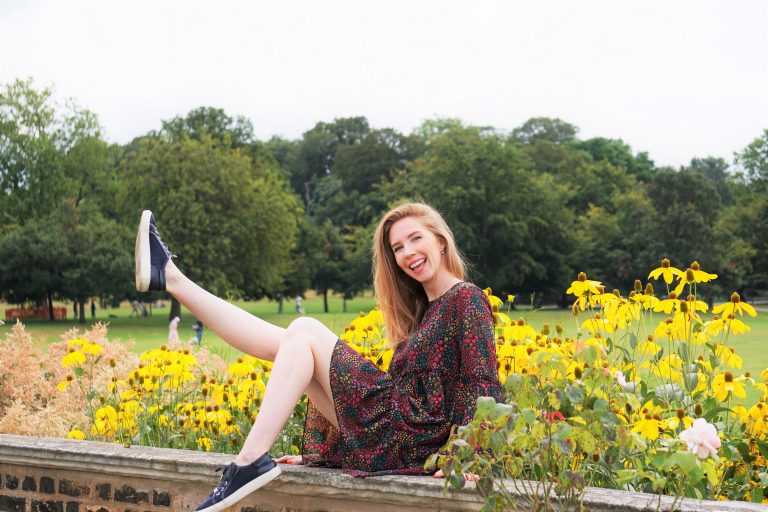 I’m Emma Loveday (or Coach Loveday as some clients like to call me) and I’m just an average joe who knows a thing or two about effective storytelling.

Little Emma gets thrown into stageschool at 11 years old for being super duper shy.

“She needs to build her confidence” says the Loveday parents.

The direct feedback of an audience applause becomes an ideal source of external validation, much wanted as her social anxiety begins to develop into full blown anxiety disorder.

She goes on as a late teen to study drama for a year in Shakespeare land (Stratford-Upon-Avon) followed by an Acting Degree at University.

(She jokes that acting is the best lesson in human psychology one could hope for. The world would be a better place if every person indulged in an acting class or two, she says with gusto)

Mid-twenties Emma writes stageplays and screenplays but her social anxiety disorder stops her from persuing an acting career.

INSTEAD, she becomes a top diamond seller in a luxury jewlery store for over 2 years.

Donning the badge ‘Diamond Ambassador’ she led team sales trainings and discovered that aaaaaaaall of the things she’d learnt about human behaviour as an actress, became vitally important when it comes to selling.

Fast forward a few years and a rather eclectic CV later, Emma finds herself in a her late twenties as a writer.

Ghostwriting a best-selling self-help book for an author who shall not be named (I can keep a secret). Increasing traffic to 35,000 views per month with SEO content writing for a small jewelery blog that started at zero AND…working as a freelance social media copywriter for accounts with upwards of 50,000 followers.

People is what I know.

Writing is what I do…

Storytelling is what I do best.

After overcoming a decade with social anxiety disorder (which was based on the belief that who I was at my core wasn’t someone worth knowing) I want you to tell YOUR story with the belief that your story is worth telling… and that your people want to hear it.

AS WELL AS telling inspiring and highly relatable stories based on a deep and freaky-deaky level understanding of your ideal client.

After all, we’re still talking business here. Am I riiiiiiight?!

The big fat reason why I'm creating The Content Code at such an affordable price? 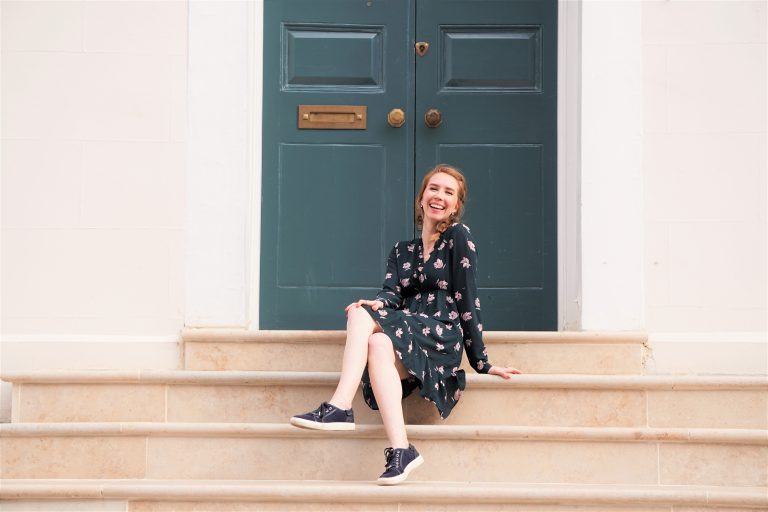 I'm a working class gal with no network, no connections and no financial backing who has built myself a business through storytelling.

And I’m not feeling so groovy about the ‘if you don’t invest everything until you’re living on the street and 150K in debt then you obvs don’t want to be reeeeeally successful’ narrative.

It's just my way of leveling the playing field 😉

This is affordable, accessible and ideal for you if:

This is not for you if:

(And please listen up, if you’re real honest with yourself and you tick some of these boxes then no judgement friend… you’re just better served elsewhere)

I know, what a whopper of a list that is.

But if you see yourself in there, don’t be prideful… tap out.

PSA: The Content Code will be available for only 47 British squiddies (for now) in downloadable PDF version.

I know, still an absolute steal.

BUT, and this is the juicy part…

If you nab the PDF version for £47 you will get instant access to the online program at no extra cost once it’s released in early Feb, 2023.

And when you get messages in your inbox like this, things get really exciting... 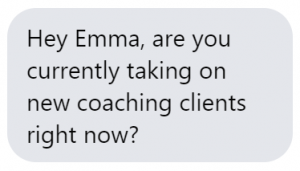 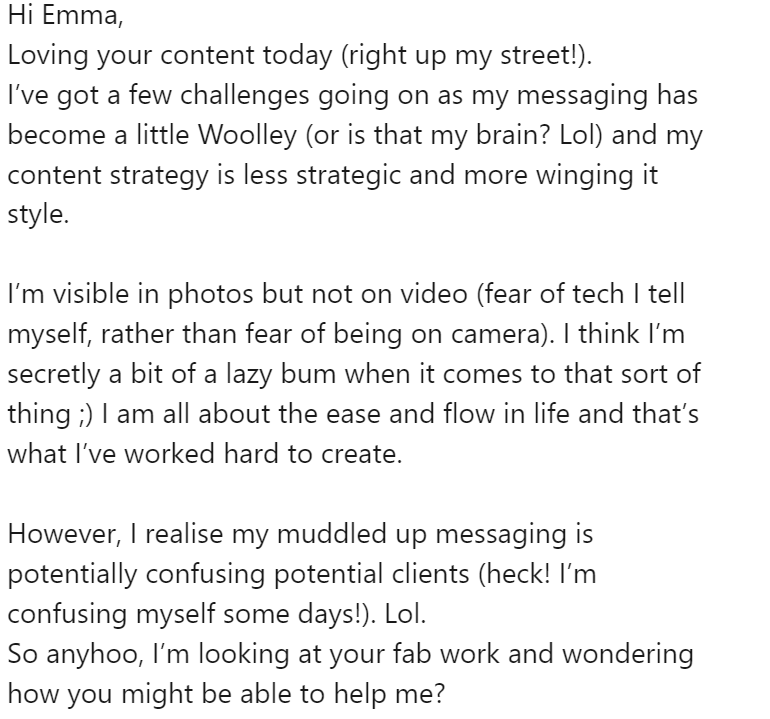 The questions everyone wants answered...

If you purchase the PDF today for £47, it will be sent to you via email with a link to download.

Once the full online program is available, it will be delivered as a digital course. You will have a username and password to access a student portal where you can go through each module.

(If you purchase the PDF only version for £47, you will have direct and free access to the digital course once it is complete)

How long will it take to see results?

This entirely depends on your output and your willingness to experiment.

If you apply these learnings, you could see results for yourself within 90 days but I cannot guarantee your results, that’s up to you 😉

Why is it offered at such a low price point?

I come from a working class background with very little in the way of connections and financial support. I know how hard it can be to get started and I’m quite tired of the ‘you only reeeeeeeally want it if you’re willing to bankrupt yourself’ narrative.

I believe in investing in yourself. But I also think it’s naive not to acknowledge that not everything is accessible or affodable for everyone.

This is just my way of helping.

Who is this for?

It is written for coaches and service based business owners.

A lot of the examples used are from the coaches perspective but they all apply to service providers as well.

If you’re just starting to market yourself online and having a ‘WTF do I do’ moment, this is for you.


If you’ve been creating content for a while but nothing is landing, this is for you.

If you’re a bit sick and tired of splurting out educational content that has no character or personality, this is for you.

If you’re more established but you’ve stagnated and want a new perspective and approach, this is for you.

If you’ve established a client base offline but now want to establish one online and don’t know where to start, this is for you.

Which platform will this work for?

I’ve specifically written this with Linkedin as the platform in mind.

However, this isn’t about how to use any one platform, it’s about formulating a message that resonates with your audience.

You can apply these lessons to any platform but it is up to you to understand what works best for each in terms of formats (video, carousel, short form, long form etc).

Most examples given in this guide refer to Linkedin as the social media platform of choice.

Will it help me grow my audience?

The focus here is NOT growth.

The focus is conversion through storytelling.

However, you will also see slow and steady growth as you attract fellow industry peers and ideal clients through your content.

The only reason you wouldn’t grow is if you don’t post consistently and you don’t put the time in to learn how to create read-worthy content.

NOTE: The purpose of this guide is to grow and convert an engaged community. If you are after templates, quick fixes, tips to go viral… you’re in the wrong place.

A full refund is available upon reciept of evidence that you have tried to implement the teachings in this guide.

I will send the breakdown of what is required in order to qualify for a full refund via email. This will include, for example, screenshots of completed exercises and posts etc.

Once evidence is provided, it will be transferred back into your account.

This is a self-study program. You are welcome to get in touch regarding any technical support you may need.

If you’d like 1:1 support from me, please do reach out via email at hello@emmaloveday.com and we can discuss how we can work together either in my Content Audits or 12 week 1:1 Coaching Program.